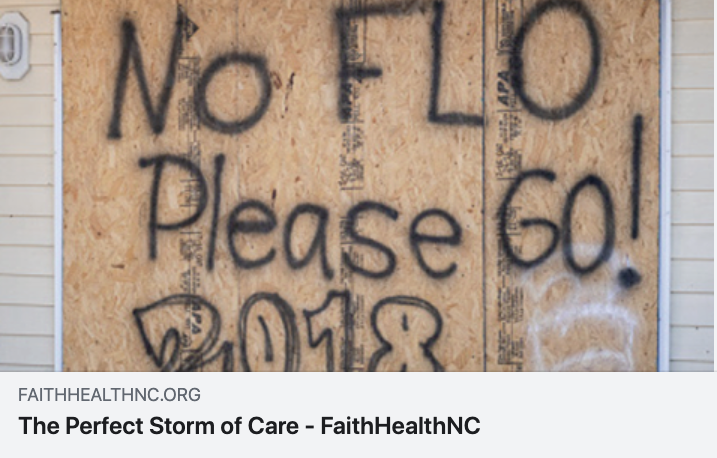 “When you think of hurricane relief, you envision truckloads of bottled water and canned foods, clothing and diapers, medical supplies and money. You don’t often think of spiritual care — the kind of counseling that convinces you that all things are possible, even in the aftermath of a destructive hurricane.

That’s what happened following Hurricane Florence, the wettest tropical cyclone to ever hit eastern North Carolina. From Sept. 12-15, 2018, Florence pounded the state with wind speeds of more than 100 mph. Water proved even more deadly and damaging, as storm surges of nine to 13 feet were topped by devastating rainfall of up to 30 inches. Many towns were completely under water — in every way, including spiritually.

The clergy in Wilmington and the small towns surrounding it, as well as those at New Hanover Medical Center, worked round-the-clock with their communities. Like the people they were serving, many clergy were living without power, food and water, their homes badly damaged. One exhausted pastor expressed the bright and shining ray of hope: “I knew before it quit raining that the Baptist Men of North Carolina and CareNet would show up to work alongside us.”

They did. The story of working alongside church clergy in the trenches began right after the storm, said Terry Tackett, regional director of Coastal Region CareNet, a community-based, counseling ministry offering pastoral care and psychotherapy services to people of all ages, regardless of denomination.”

This is a single event page with sample content. This layout is suitable for most websites and types of business like gym, kindergarten, health or law related. Event hours component at the bottom of this page shows all instances of this single event. Build-in sidebar widgets shows upcoming events in the selected categories.