Debbie Morton’s decision to step back from her longtime role as clinical care coordinator in the Piedmont Triad region might have set some minds racing. Fortunately, her replacement goes by a mantra he learned from Morton herself—slow down. 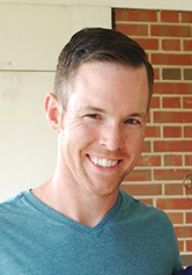 Jeremy Fox, LCMHC, appreciates even more in his new role the words of his former leader.

“There were many times where Debbie would explicitly state that we needed to slow things down in order to resolve an issue, or I would see her slow her own thought process in order to fully appreciate a question being asked,” says Fox, who interned at CareNet before joining the two-year residency program in psychotherapy and spirituality in 2016. “When we slow down, we see things differently and are able to respond to others differently.  I have watched Debbie slow down at the appropriate times, and it is something that I try to imitate.”

Fox would be the first to acknowledge he hasn’t exactly slowed down himself when it comes to learning.

He received his master of divinity from Wake Forest University and a master of science in clinical mental health counseling (with a specialist in education in couples and family counseling) from UNCG. Besides completing the residency program, he received a graduate certificate in health care administration from East Carolina University in 2020. Fox also helped develop the highly successful family medicine co-located site for CareNet in Lexington, and he has been instructing psychiatry residents on emerging therapy models and facilitating processing groups for the psychiatry residents.

Fox says his love of education and learning contributed to his decision to succeed Morton.

“One of the reasons I sought this out was my enjoyment of helping colleagues,” he says. “I find fulfillment in helping others find success and competency in their clinical skills. My first goal for the position is to learn the position and find my rhythm while continuing to carry a caseload. Right now much of my energy is spent trying to make this a smooth transition for everyone and navigating the upcoming authorizations changes with Medicaid.

Barbara Saulpaugh, the Piedmont Triad’s regional director, says Fox’s diverse education and experiences since joining CareNet made him a natural for the role of clinical coordinator. It’s a position important in such a large region, which she notes has a large staff of counselors and support (24 people), as well as more than 10 locations and three boards of directors for non-profit fundraising. The Piedmont Triad is unique among CareNet’s regions in having both a regional director and clinical coordinator.

Fox says although he is slowing down in absorbing the new role, he also appreciates that clinical mental health care is changing, with the organization adding more co-located sites such as the one he helped establish in Lexington, as well as integrated sites and working more closely with business through the BestHealth for Business program as CareNet has been doing.

“I think we will see CareNet moving more to where the people (clients) already are, and less waiting for folks to come to us,” Fox says. “I hope this will help destigmatize mental health and demystify the role of behavioral health clinician.  I also hope this expands the awareness of CareNet and allows us to reach others who would not have heard of us, and can benefit from the amazingly skilled, compassionate, thoughtful clinicians we have.”