News and Notes From Around the Region – April

Amanda Whicker Meets Man She Helped During Half Marathon in 2021 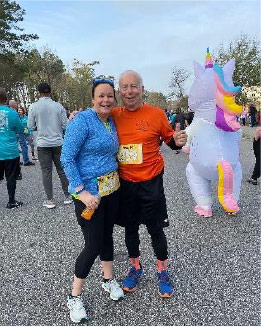 It was a year ago that Amanda Whicker, a therapist in the Piedmont Triad office, helped save a Kentucky man, Alan Osuch, when both were running in the Myrtle Beach half marathon. Osuch collapsed at the 8.5-mile mark last year in cardiac arrest, and struck his head on concrete when he fell. He was hospitalized for several weeks before being able to drive home.

This year, Whicker was able—with the two other women who stopped last year to help Osuch when he was stricken—to meet Osuch and walk with him during the 5K portion of the event this year on March 5 (Whicker and Osuch, left).

Whicker, Cindi Alsobrook of Hilton Head, South Carolina, and Melissa Sumner from California, crossed the finish line with Osuch this year, and then spent the day together, “enjoying a better outcome than last year’s race,” Whicker says.

Osuch is a well-known athlete and head of O Such Tri-state Race Planners, a group that plans 40 or more races per year in the Kentucky-West Virginia-Ohio region as fundraisers for nonprofits. Whicker says he is “doing great, his health is good and he is getting back to not only walking 5ks, but running them.”

CareNet East Regional Director Janie Taylor will lead a six-week therapeutic writing group for women in May and June. The goal of the program is to help women learn more about their personal narratives, the characters in their life stories and a path toward living a more desired life.

Taylor says she has worked with clients for whom writing helped ease, for example, grief. She says she will be using a cognitive behavioral approach and her own therapeutic experiences in her leadership.

The group will meet Mondays at 5:15 p.m. starting May 2 at CareNet East, 108 Oakmont Drive, Greenville. The cost for the program is $125, which covers most supplies. Some scholarships are available. A virtual group is being planned for later.

Volunteers Help CareNet East With Landscaping Outside of Office 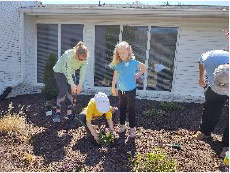 A group of volunteers from St. James United Methodist Church recently helped spruce up the landscaping outside of CareNet East’s office. Regional Director Janie Taylor says her working relationship with ministry staff and congregants at St. James—who have previously contributed to CareNet—led to the work outside CareNet, part of a morning of community volunteering by the group. Pictured in the photo, from left to right, are: Kristen Letchworth, Langley Letchworth (bent planting), Arden Rae and Spencer Letchworth.

CareNet has been awarded a $225,000 one-time grant from the North Carolina Baptist Hospital Foundation that will pay for five residents in the next class of the two-year Residency in Psychotherapy and Spirituality.

The grant assists CareNet as it moves to seek full external funding for positions in the residency program, CareNet President Bryan Hatcher says.

Hatcher says he hopes to implement trauma-informed care throughout the organization and has been asked to provide leadership on the initiative across Atrium Health Wake Forest Baptist, partnering with Atrium leaders to implement across the enterprise.

Central Piedmont Region Welcomes Rebecca Setzer to Staff as Therapist
The Central Piedmont region this month welcomed Rebecca Setzer, LCMHC, to its staff. She has been a therapist in the Marion office, and moved to Mooresville last fall upon her marriage. She graduated with an MDiv and counseling degree from Gardner Webb University, and previously completed CareNet’s two-year residency in psychotherapy and spirituality.

Chrissy Holiday, a therapist working in the Western region, is now a fully licensed clinical mental health counselor. She is currently a CareNet fellow, with a focus on EMDR and treating trauma, having completed CareNet’s two-year residency in psychotherapy and spirituality in 2021.

Carleton Irving, a therapist in the Piedmont Triad office, has completed Level 2 Deepening and Expanding training in internal family systems, or IFS, with the IFS Institute.

Irving, who first learned of IFS during his two-year residency in psychotherapy and spirituality, had completed level 1 training in 2016-17. He says IFS “influences the way I work with almost every client. It really affords me the ability to deepen into trauma and healing work with most clients and see tremendous changes.”

“The 10 years has gone by so fast and we have changed so much, from a region with about eight clinicians in a few locations to 24 clinicians located all over the region; some integrated and/or co-located into businesses and physician practices,” Saulpaugh says. “I look forward to future growth and getting back into the face-to-face educational activities in the community, including programs on suicide prevention, bullying and anxiety.”